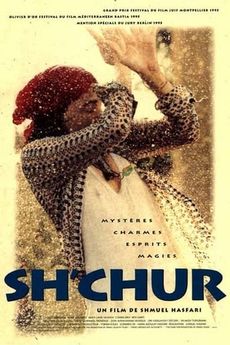 A Jewish Moroccan immigrant family living in Israel is nearly destroyed by conflicts resulting from generational differences in this arresting Israeli drama. It begins as Cheli, a successful but emotionally troubled talk show host who has been unable to deal with her traumatic childhood is traveling to attend her father's funeral. She is accompanied by her mentally ill sister Pnina and her adopted estranged daughter. It is a hellish trip and as they travel, flashbacks chronicle their painful youth. Rachel had always wanted to break away from her family's Moroccan heritage and so spent much time trying make herself fit in with her Israeli peers. She was humiliated by her poor, ignorant family. Her father was an overbearing, blindly religious fanatic and their mother was a witch who manipulated the family by casting spells. She feared her mother, and despised her insane sister, to whom she was very cruel.